This is a Pacific Black Duck, Anas supercilious, and is found in most of Australia except for the central deserts. Its habitat is usually deep heavily vegetated waterways such as swamps. At times it will be found in open water and wet paddocks. This particular one was living in an inner city pond, no doubt being fed by the visitors to the gardens. In size it will be between 47 to 60 centimetres.

The following image is one I took several years ago in New Zealand and it illustrates how the Pacific Black Duck forages for food. This is referred to as dabbling. These birds are mainly vegetarian but will supplement their diet with crustaceans, aquatic insects and molluscs.

The Pacific Black Duck is closely related to the Mallard, A. platyrhynchos, a species introduced from the Northern Hemisphere. They have very similar habits and the two species will interbreed.

The tourist information blurb will tell you that near the old swing bridge is where the river meets the sea. It is indeed where the Erskine River runs into Bass Strait near the town of Lorne. 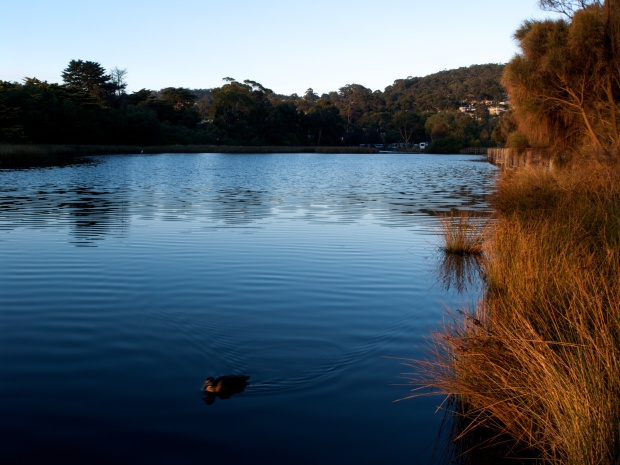 Near the Old Swing Bridge, Lorne, the rising sun highlights the vegetation on the bank of the Erskine River.

Erskine River – Morning reflections on the still water of the river.

Erskine River – Where the river meets the sea!

The Old Swing Bridge is situated on the Erskine River at Lorne on the Great Ocean Road on the south west coast of Victoria, Australia. Constructed in 1937 it has become a famous landmark and tourist attraction. Also at this point there is a grave which holds the bodies of two young children who, in 1850, were suffocated in a tunnel they had dug into the sandy bank of the river.

The Old Swing Bridge at the mouth of the Erskine River 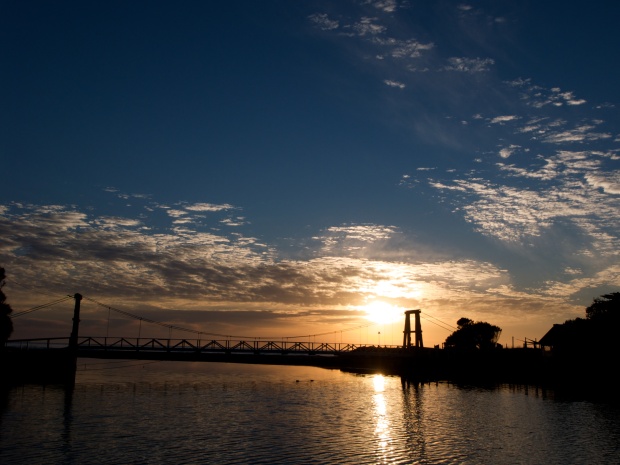 This morning was an early start. I headed off to Lorne situated on the Great Ocean Road on the south west coast of Victoria in Australia. After a quick breakfast (black coffee and an egg and bacon roll) at the local bakery it was down to business setting up the tripod and camera.

The images below are the best from my first shots. There are others that I am in the process of developing to follow in future posts.

The jetty at Lorne #2

Is there a flower more beautiful than the Magnolia? I think not!

This photograph was taken a few weeks ago at the Botanic Gardens in Colac, Victoria, Australia.

This is an image I shot on Tuesday night when I went to Lake Colac to shoot the sunset. It will be added to my project called Empty Seat in the Park.

Empty Seat – by the lake

I was unsure of which version to post so both are presented. Your feedback is very welcome.

Empty Seat – in black and white.

This is my 150th  post. My blog had its first birthday just a couple of weeks ago. With these milestones in thought, I went to Lake Colac last night for the sunset. Whenever I need inspiration, I go to this lake and it always seems to deliver something special. Last night was no exception.

I also think that it is time for a new theme to freshen up this blog. I hope you like my choice which is Hero. 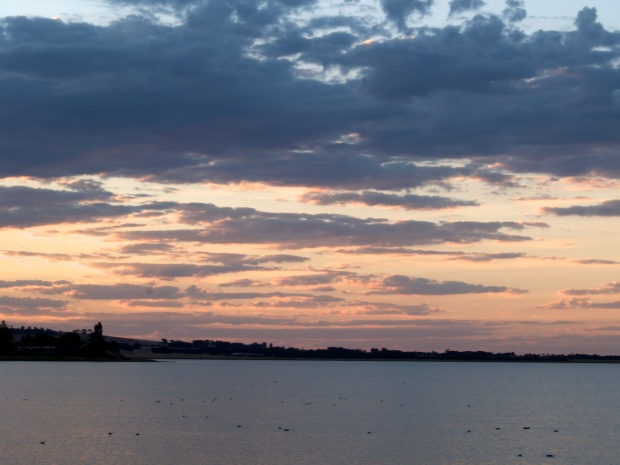 This is a Ford 1900 tractor. It was parked at the rear of the Angling Club in Lorne, on the Great Ocean Road, Victoria, Australia. It is not a big tractor but obviously big and powerful enough to pull the boats out of the water and up the boat ramp which is close by. On this day it was just standing there, perhaps its work had been completed for the day. 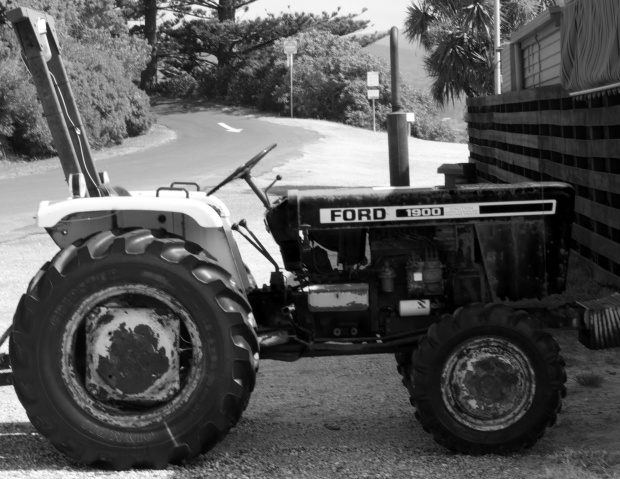 Ford 1900 – behind the Angling Club at Lorne

Once nicknamed the Bay of Storms, Apollo Bay is situated on the Great Ocean Road on the south west coast of Victoria, in Australia. It is primarily a fishing village with about 11000 residents.

These images were taken in 2006 when I made the transition from film to digital photography, and they are some of the first photographs made by me with my new Olympus E-500 D-SLR.

As you can imagine, in regard to the processing of images, I have learnt a lot since these photos were taken and I have reworked them for this post. 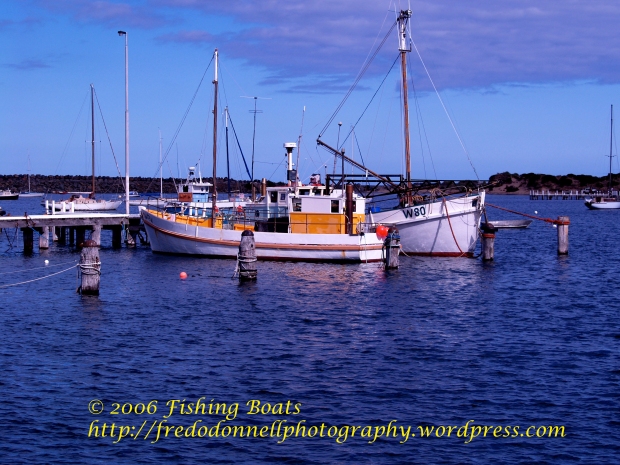 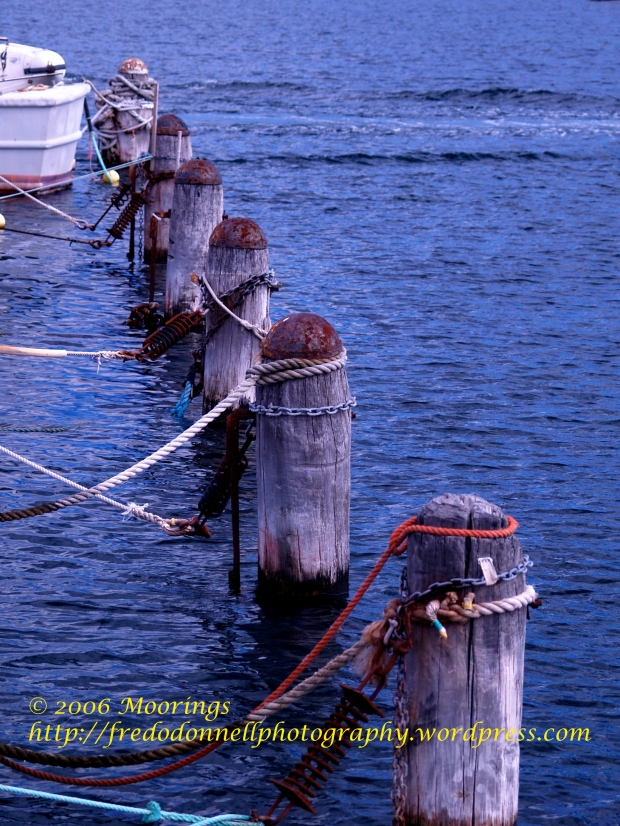 Beach Front – Where the mountains meet the sea

Regular readers of this blog will know that I often find inspiration in my own garden. Many years ago I read in a gardening magazine of a gardener who left some of his vegetables to remain unharvested and go to flowers. The article was illustrated with pictures of beautiful parsnip and carrot flowers.

The images below are the flowers of herbs in my garden.

Melbourne bird-watching without a car

Empowering Women, One Shot at a Time

A description of my walking/hillwalking and photography trips; plus a few holidays!

Growing and harvesting a bounty of blessings in my potager.

thoughts from the forest

News and stories from our iconic coast

Lee Hiller Photography - Exploring Nature One Step At A Time

World through the eyes of a Nomad

The Drinking Bird
Backyard and Beyond

Starting out from Brooklyn, an amateur naturalist explores our world. "The place to observe nature is where you are."—John Burroughs

A collection of photographs describing the natural beauty and wildlife of the Malwa region of Madhya Pradesh and beyond.**** All pictures are taken by yours truly with Canon Powershot SX50HS****

Capturing Life One Image at a Time

It's the little things that make the biggest impressions...

of the Pacific Northwest: Interactions with the wild things--Live life outdoors!

Words and photography from the Shetland Islands

Walk and Bike in France and Europe www.walk-bike-camino.com

Looking for birds at home on our farm, and anywhere I travel

a photographer's guide to the city

A Brief Moment in Time

This WordPress.com site is for sharing my photography.

A Nature Diary From a Small Essex Garden

fredodonnellphotography
Create a free website or blog at WordPress.com.